The ideas behind the books

Following in our father's footsteps 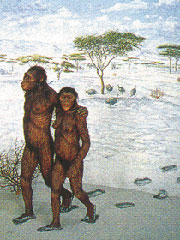 Have you ever come across a beautiful clean-washed beach with virgin golden sands and then walked backwards across it, or hopped, for half a mile, just to leave a cryptic puzzle for the next person who comes along?

There's a set of footprints in eastern Africa fixed for all time in what is now a layer of volcanic rock. What is the story? At a place called Laetoli in Tanzania there was a volcano which erupted about three and a half million years ago. Think about it for a moment, because that is an awfully long time ago. A layer of volcanic ash settled on the land thereabout and then it rained and the ash turned into a layer of mud. Lots of animals wandered across this mud - hare, guinea fowl, elephant, giraffe, sabre-tooothed cat - and also some kind of hominid A hominid is a primate who walks upright, so that would include any of your early ancestors. Then the sun came out and dried the mud, and hey presto you have a snapshot of who was busy walking where three and a half million years ago.

If you look at the photo you can see the tracks of two individuals, one large (possibly male) and one smaller (possibly female or a child). The tracks are very close together, so conceivably the male had his arm round the female, or perhaps the smaller one was walking slightly behind. Apparently, and here I have to take someone else's word for it, if you walk in the smaller footprints you can see quite clearly where she hesitates and glances to the side before continuing on her way. Well, you would be a bit nervous wouldn't you if the local volcano just erupted and several species were eyeing you up for breakfast

But these footprints might tell us even more. It seems that while the smaller footprints stand out clearly, the larger ones are blurred. Was he shuffling his feet? Geologists think this volcanic mud would have been quite caustic at the time, so perhaps there was also a third individual walking in the larger footprints, trying to protect his feet? Perhaps it was a child?

Who made the footprints? Palaeontologists are pretty sure that there was a species of hominids living in Africa between three and four million years ago, called Australopithecus afarensis, who were among the earliest ancestors of modern man. These characters had comparatively small brains, not much bigger than apes, and had long arms so that they could still retreat to the trees if the going got tough, and they were vegetarians.

If you met one today, he probably wouldn't remind you of anyone else you know. He wouldn't have language and he wouldn't make tools or hunt. But he could stand up and walk on his back legs, which was the first thing. The rest came later.

I found this story in: 'ape.man' a BBC book by Robin McKie (2000) on the story of human evolution. I found it absolutely fascinating, and felt compelled to read it after I had read The Kin by Peter Dickinson (1998). The Kin had left me wondering what exactly it was that defined humanity, and Robin McKie helped me to answer my question.

Anyway, next time you wade through the mud at Glastonbury or the British Grand Prix, have a thought for the archaeologists who are going to come after you, and be sure to leave them something to talk about.